And the Dream Came True

And the Dream Came True

And the dream came true: after one hundred years two grandsons of Joe Garvey: Graeme and David set their feet on the Bismarck Strasse in Pila, formerly Schneidemuhl. 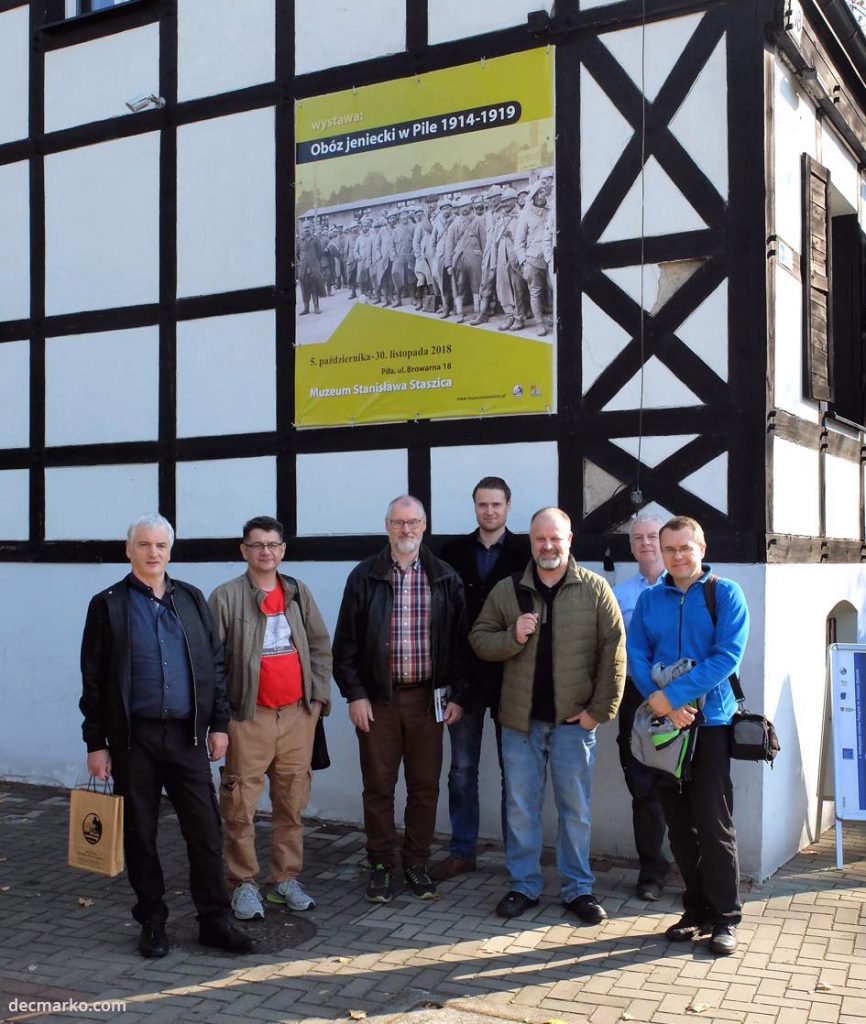 Visitors in front of Staszic Museum

It was the centre of a German prisoners of war camp, located at east suburbs of Pila. And the place of football pitch where Joe and his British team mates played fantastic games and never got beaten. Graeme and David, his two sons Ruben and Joe and family friend Paul came on 16 October to Pila. The whole next day we spent trying to find any trace of  Joe’s stay here… a hundred years ago.

It wouldn’t be possible without Maciej Usurski, the young director of local Staszic Muzeum and the passionate man who knows everything about prisoners of war camp in Pila from the times of  Great War.

We began from visiting Staszic Muzeum, where Maciej prepared fantastic  exhibition dedicated to a camp. Thanks to his hard work  we could feel like POWs smelling wooden planks of the camp shanties. 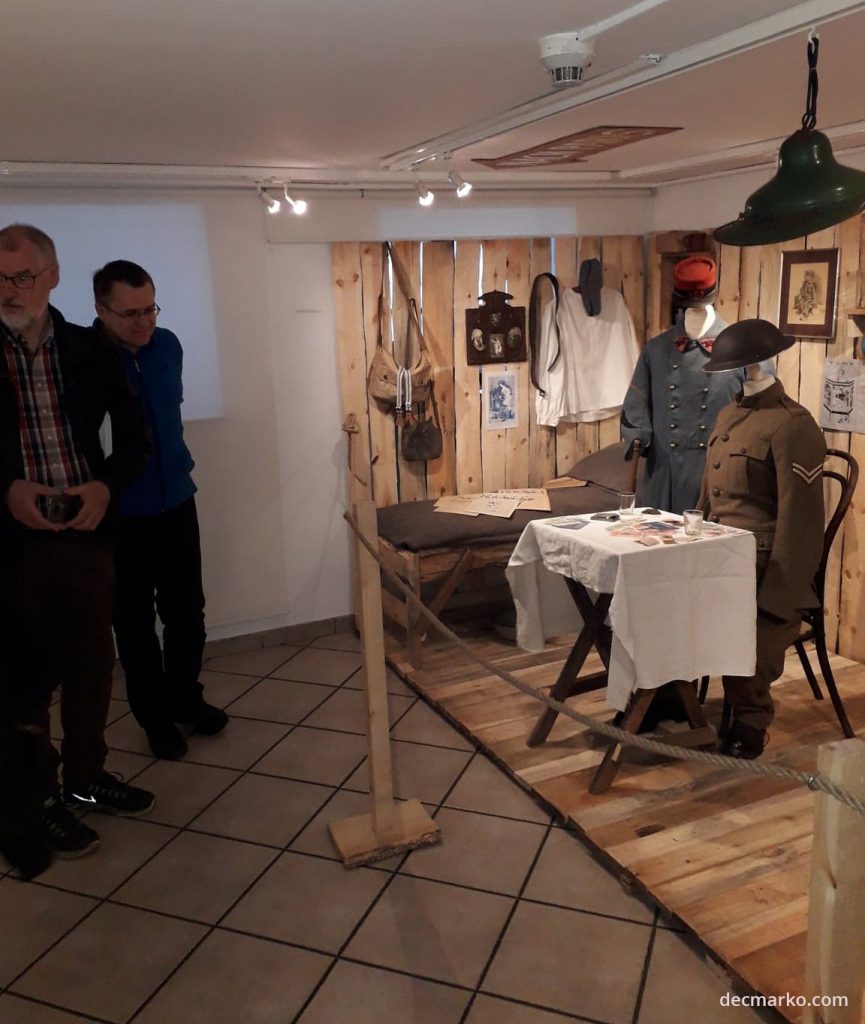 Maciej and his exhibition

Garvey and David were interviewed by Karolina, local TV journalist.

In the meantime Paul got his opportunity and visited a part of the museum dedicated to Stanislaw Staszic. Thanks to English version of the exhibition he soon surprised us with his knowledge of that philosopher, geologist, writer and poet.

Our next stop was Leszkow.

An old and forgotten cemetery, a burial place of more than 3.000 POWs: Russians, Russians of German or Jewish origin, Russians of Polish origin,  French, Belgians and British; so many different cultures, religions united in one: hope to be free one day, hope, that war ends and hope to see families again.

We stood in muse at the Black Monument. I show Graeme and David the very spot, where Joe was standing at the burial ceremony one hundred years ago, which truly amazed them all! 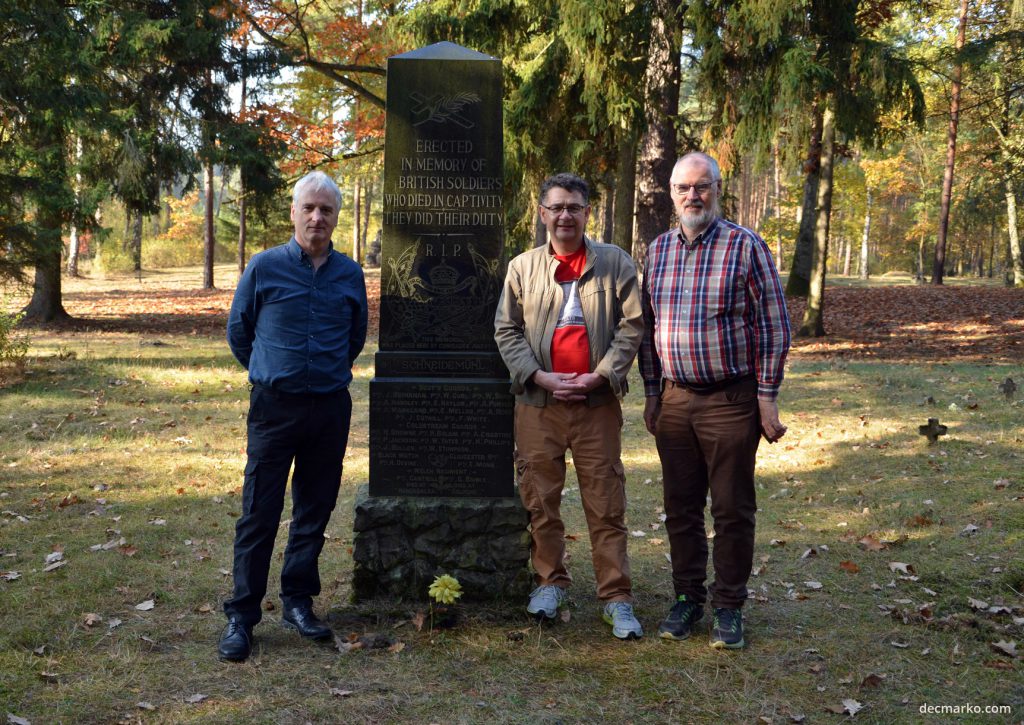 Graeme, David and me at the Black Monument

Shown them the forgotten graves of eighteen British, the resting places in bushes, Graeme asked me, what we could do  about that.

I think we must make public in the UK the great mistake of CWGC, which was moving the gravestones from Leszkow to Poznan cemetery.

We must do everything, to bring them where they once and for ever belonged, to Leszkow cemetery!

After visiting Leszkow we moved to the place where the camp existed in the times of Great War. Nothing looks the same of course in that quiet and remote place. Nothing, except… Hindenburg Strasse, the only and narrow way across the fields.

We stood at the narrow, imbricated road trying to get back in time. Maciej showed us the places where once the wooden planks were.

– And the football pitch? – wanted to know Graeme.

Maciej hesitated for a while, looked round and pointed nearby bushes:

– Exactly here your Grandad and his team scored goals!

The last point of interest was of course the railway station.

Again, we stood at the very platform, where Joe and his brothers in arm finished their one-hundred- hour journey from Western front in cattle trucks.

– Here exactly, we are at the very point. Here from she watched trains coming with prisoners of war as well as German trains with wounded and those who lost their reasons witnessing the cruelty of war. She described it all in her memoirs “There we’ll meet again”.

We got to the station building, that was just redecorated strictly keeping the old, original view. Waiting room and restaurant look exactly as they did in 1916.

I hope, that Graeme, David, Ruben, Joe and Paul found that spirit from the past, when private Joe Garvey was a prisoner of war in Schneidemuhl.

In the meantime, on 25 October Maciej Usurski published his last book: memoirs of some prisoners of war from the camp in Shneidemuhl. Among them British and French.

Will anybody remember those, who did their duty?